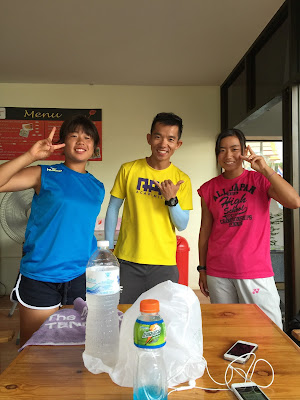 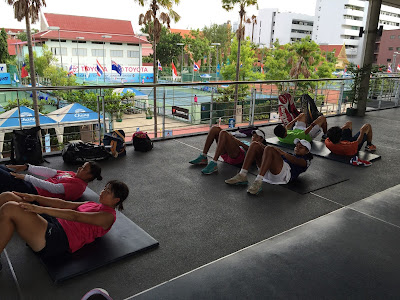 The second female player from Japan Yonehara Sukura (bottom right) started in the main draw both weeks. She got through to the 3rd round of the second week and lost to a fellow Japanese player Yuki Ando 7-6(3), 6-4. Sakura is a powerful hitter off of both wings and has lot of potential. Its really difficult to predict what the outcome is going to be by just physically looking at the player. There are so many other variables that factor into each match which makes the game so interesting. Next is an ITF newcomer Ukawa Taiga from Japan playing against Dhananon Trisutha  of Thailand. Being Taiga's first overseas ITF tournament he was quite nervous. Coming to Thailand as an alternate his luck didn't go his way during the first week unable to receive a wild card, but the second week he received one. His first round qualifying match was a 6-3, 6-3 win. He displayed sound technique from the baseline and greater consistency over his opponent who made more unforced errors.
Taiga's second round match was a much different player who was a bit more experienced. Alvin Wee Jie Teng of Malaysia [3] displayed consistency, more patience, and creating angles causing Taigi to make the initial unforced error.  A loss is a loss, but what you learn from it is the important part. Being his coach that day we were able go through his match and start planning for his future goals. 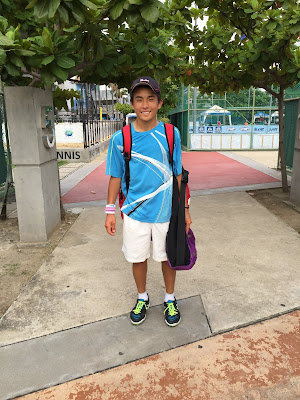 The second male junior from Japan is Kondo Kenta. Kenta displayed strong baseline line skills and consistency. Off the court he is very polite and reserved. The local Thai staff were very friendly to Kenta because of his personality.
Kenta was also one of the luckier players who received a wild card both weeks.The patience payed off as we waited for the draw sheet and final wild card recipient until 20:30 in the evening.
Kenta won his first round match quite easily 6-0, 6-2 against Jonah Tugger of Thailand. The second round match due to rain started very late and his opponent from China Naifu Zhang was tough. The match lasted 2 1/2 hour ending in defeat 7-6(5), 2-6, 6-4. His opponent was tricky mixing in ball speed and spin variations forcing Kenta to come up with tough shots. Both players showed verbal and physical emotions pumping themselves up after important points.  At times Zhang was deliberately trying to emotionally provoke Kenta, but Kenta kept his cool.
I believe Kenta's next challenge to his game is to have a bigger weapon, become more aggressive when balls are sitting up, and gain greater confidence at net.

In closing,  having the opportunity to view an ITF tournament was refreshing and educational. The experience of meeting players, coaches, and being in the tournament environment was very rewarding. I hope to have many more experiences to share with our  juniors back at the academy.