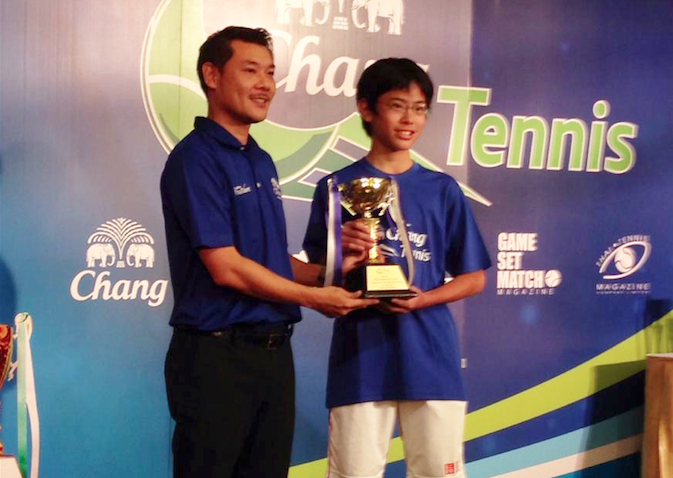 Hello it's Coach Sakai.
During the Songkran holiday(4/12 ~ 17th),  players class Koki Matsuda had successfully become champion of the  PTT Junior Tournament (Grade 4) U14 held at Sports & Spa in Minburi, Bangkok.
This will be Koki's second tournament win following his prior win in mid January.

His final opponent was a well known U14 Thai player despite that a victory 3-6 6-3 10-8. His quarter-final and semi-final matches were also hard fought matches, but resulting in wins.

His final opponent two years ago at the same tournament Koki has memories of easily losing in the first round.

Along with Koki, other fellow athletes training in the players class day in and day out are starting to show results at tournaments.

One reasons for such results we would like to mention, academy director and 1995 All Japan Champion Mr. Kaneko Hideki has created a program based on his instructional philosophy.

Since I have started instructing juniors nearly 10 years ago, the results have improved every year. Last year our thai junior in the boys U12 became top in the country.
This year, our player class alumni Tasuku Machida currently attending Yanagawa high school in Fukuoka Prefecture, Japan contributed to his team becoming the All Japan National Champions.

I have seen many tournaments at various levels and understand that in order to win 'sheer will' or 'having the ability to hit the ball' is clearly not enough. A program based on correct instructional philosophy is necessary.

At the end of each year, multiple professional players and almost 100 juniors from around the world come to learn from our academy program during a two week camp.

Juniors who are aiming to be professionals and parents please feel free to contact us at anytime.