This year marks our 11th winter allout tennis camp. A mult-structred program aimed to create an environment where junior athletes can physically and mentally exert his or her maximum potential.

What was felt from allout ZERO1 This summer the 'allout ZERO1' short tennis program was held in 9 different cities throughout Japan. The concept,"Creating the strength from ZERO to ONE."
The camp emphasized on the importance of the first step into competitive tennis. This camp provided the first boost. A program similar to telling a story-tale even only for two days there was new 'realisation and awareness'.


allout beat concept This time the 'allout' held in bangkok will have a new concept 'beat' added which incorporates 'to feel', 'intensity', program with good tempo, and to win against yourself. We aim for a camp which provides multiple learning opportunities. Continuous 'awareness and realisation' and playing at a high level of concentration will allow a higher success rate which in turn speeds up the improvement process.  And finally, the camp is executed over a two week story-based program to allow the athlete to further comprehend and deepen their understanding.

A two week story-based learning program
The camp is a two week program divided into three stages for top athletes to acquire the necessary skills.
Stage 1. Workshop focusing on technique for executing tactics
Stage 2. Repetition of technique related to tactics
Stage 3. The output of tactics
A two week program is ideal for learning new concepts, practicing the technique required, and finally being able to use what has been learned in actual match situation. Also in Japan, for various reasons it is challenging to conduct a tennis camp that runs for two weeks. Having the tennis camp in Bangkok where transportation is more accessible and where time zone influences is minimal makes Bangkok the ideal environement for a highly focused camp.

Suitable tennis environment
Bangkok has year-round summers, but starting November it enters a dry season with little rain. Not only does Bangkok have its weather perks, but Thailand among Asian countries share similar cultural and religious values to Japan. Likewise, English and Japanese languages are rather easily communicable and the food being delicious makes Thailand ideal. Also,versus the rest of the world every year the level of Thai tennis keeps increasing.

Start younger juniors on the Asia tour!
Younger  juniors or athletes around Asia who are interested about tours abroad to the USA, Europe, and Austrila but are unfamiliar to what it would be like is common. The allout challenge not only offers the program, but the well regarded Thai hospitality may be another attractive point. It is a program that is optimal for younger players and juniors wanting to take the first step. When considering limited amount of time, rather than travelling to Europe, United States, or Australia, the short distance and minimal time zone change makes Thailand an ideal location.

the 5 elements to allout

One aspect of the camp is to Not only physically sweat, but to mentally as well.


1．Program built on a clear concept
Raising the ‘quality of athlete’ and also the ‘quality of human being’ are very important.  Choosing a clear concept and not diverting away from the concept is how the program is structured.  We physically train our bodies not only to focus on just tennis alone, but through sports we refine ourselves through many elements in order to draw-out the players maximum ability. Such a training program is the goal we strive towards.

2．Increase creativity and imagination
A feature of the allout challenge is to view plays by video to create a solid mental image.  Then recreate the play like a reflection.  Through the use of large projector screens, we view separately the situational play, see what technique is used, and why it is being used so we can easily understand and ingrain the image when going on court.

3．A tactical program that is systemized
The 50 tactics has been systemized into a program that can be easily practiced and is not something intuitive. Essentially, a player learns tactics naturally through various tennis situations or by playing on different court surfaces. For example, playing on clay or to be in an environment where many ATP and WTA matches can be seen. The only problem to this is how many of us and how often are able to continuously be in such environment. By systemizing the program, we are able to specifically work on the tactic and leave out what is not needed.

4．Develop top athletes who are international
Being used to environments unfamilar to ones’ own, having new experiences, and recognizing the unrecognized all help to refine an individuals gobal perspective.  Also, being able to cope living in a large group setting requires proper greeting, table manners, autonomy, cooperation, and appreciation all which can be learned through tennis in order to develop the necessary qualities for a top athlete.

5．Not only player enhancement, but staff development
Coaches who have travelled abroad are also asked to participate on court along with the training athletes. By doing so, additional coaching perspective not normally felt back home can add greater range to the level of coaches confidence which reflects the player who he or she coaches. And as a tennis club, the benefit of establishing a club which actively organizes oversea programs for junior development. 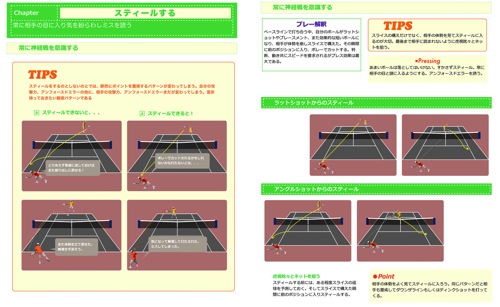 What are the 50 tactics?

We’ve extracted from real match play and have systemized 50 tactical patterns separated into 3 main groups which are Defense, Neutral, and Offense.

The importance of learning tactics in order to situationally choose the most appropriate
It is important to learn the necessary technique from a tactical standpoint otherwise no matter how much technique acquired it will never serve its true purpose.  Also, not using the tactics in a match and not being able to win the match also has no meaning.   Likewise not just winning a single match but winning throughout the year is important.  Therefore,

Aim to build a player who has consistency
In order to win consistently through-out the year, it becomes necessary to have consistent plays.  In order to play consistently for example in martial arts, ‘katas’ or in group sports, ‘set-play’ always becomes the base.

Tactics used Naturally
Being able to consciously select the best tactics in a given situation is important.  Without separating players by level, physique, and or by age, we begin tactical training at an early age which helps to develop a player who is capable of consciously using tactics.